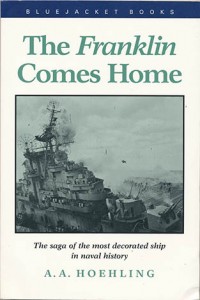 “The FRANKLIN COMES HOME” The Saga of the most decorated ship in Naval History. By A. A. Hoehling. Nicknamed “Big Ben,” the USS Franklin (CV-13) was commissioned in January 1944. Dawn on March 19, 1945, Franklin, had maneuvered to within 50 miles of the Japanese mainland, closer than any other U.S. carrier during World War II. Suddenly, a Japanese plane came out of the clouds and dropped two bombs on the carrier’s flight deck. Several explosions and massive fires from ignited fuel tanks engulfed the stricken carrier. Franklin now lay dead in the water, and lost all radio communications. The casualties totaled 832 crewmembers, in what was the U.S. Navy’s second worst disaster in history. The Franklin became the most decorated ship in Navy history. Two of her officers were awarded the medal of honor; Lieutenant Commander Joseph T. O’Callahan (the warship’s chaplain) and Lieutenant (jg.) Donald A. Gray. With just a skeleton crew remaining on board, Franklin was taken in tow until she was able to raise enough steam to proceed on her own. The badly damaged ship safely arrived at the Brooklyn Navy Yard, New York in late April 1945. Here is the complete and heroic story of this great warship and how she managed to sail safely back home. 1997 Softbound edition. Lower right cover of cover is bent. (see photo above). 132 pages, 25 black and white photographs, and index, no maps. Hoehling also wrote “The Lexington Goes Down.”