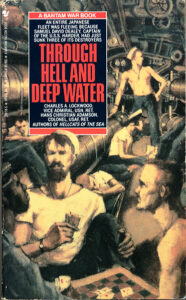 “THROUGH HELL And DEEP WATER” By Charles A. Lockwood, Jr. USN (Ret.) and Hans Christian Adamson, USAF (Ret.). From the authors of “Hellcats of the Sea.” Because co-author, Charles Lockwood knew Sam Dealey, this is the definitive work on the famed American Submarine USS Harder (SS-257) and Dealey. Harder’s only skipper was Commander ‘Sam’ Dealey of Dallas, Texas. Dealey earned the title ‘Destroyer Killer’ after sinking five Japanese destroyers during one of his many successful Pacific patrols. For his amazing achievements Dealey was decorated with four Navy Crosses. In August 1944 Harder was lost with all hands––Commander Dealey was posthumously awarded the Medal of Honor. Originally published in hardback in 1956. This is the only Bantam Paperback edition, from 1991 and now perhaps the most scarce to find! 329 pages, with many illustrations and 3 maps. Complete USS Harder crew roster, an appendix but no index.

Colonel Hans Christian Adamson, USAF, (Ret.): Like his coauthor, Charles Lockwood, Col Hans Adamson was also born in 1890. In 1942, Adamson was on a flight over the Pacific in a B-17 Flying Fortress. Off course and running low on fuel the 4-engine bomber was forced to ditch in the sea. Among the crew was famed World War I fighter ace, 52 year old Captain Eddie Rickenbacker and six others. The men drifted on rubber rafts for 23 days before being rescued. As Chief of the USAF Personnel Narrative Office, Colonel Adamson directed the collection and writing of all the human interest history of the Army Air Force in all theaters of war––frequently under most hazardous conditions. He coauthors several other books with Vice Admiral Charles Lockwood, USN (Ret.), including “Through Hell And Deep Water” and “Hell At 50 Fathoms.”