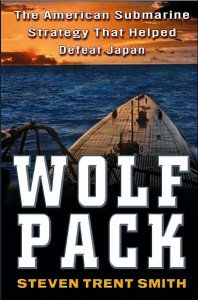 “WOLF PACK” The American Submarine Strategy That Helped Defeat Japan. By Steven Trent Smith. “Wolf Pack” traces the development of one of the most effective naval strategies employed by the American fleet in World War II. Steven Trent Smith recounts the behind-the-scenes struggles of the visionary U.S. naval commanders who sought to adapt the highly effective strategy of using coordinated submarine attack groups, or “wolf-packs,” first pioneered by the German Navy to devastating effect. Smith provides vivid profiles of the major players involved and clearly explains the important technology involved. Working from survivor accounts and government documents, he recounts, in scenes packed with nail-biting undersea action, some of the most hair-raising wolf pack operations in both the European and Asian theaters of war. The story culminates in the massive penetration of the mine-laden Sea of Japan by nine U.S. fleet boats in June 1945. “Operation Barney” marked the pinnacle of the U.S. pack strategy. Using a popularizing style, the author describes the strategies and missions of the U.S. naval submarines in the Pacific theater of World War II. The Americans had borrowed the “wolf pack” strategy of the German submarines in order to harass and sink the merchant shipping of Japan.  New hardback has 312 pages, 22 black and white photographs, 2 maps, an appendix and index. This book has a retail price of $27.95, on sale here.

“As a veteran of five submarine war patrols, including the Hellcats venture into the Sea of Japan, I found “Wolf Pack” to be very well done and as accurate as can be hoped for, considering the passage of time. The author did an excellent job of putting the whole story of the development and prosecution of wolf pack tactics into context. Combat submarines typically spent two months at sea followed by one month for refit, R&R and training. While at sea we maintained radio silence and, while surfaced, copied radio traffic on the sub frequencies, resulting in a fragmented picture of what was happening. Steven Smith has done a fine job of recreating a picture of what was taking place, helping me to finally understand things that I was part of. His rendition of the Hellcats Sea of Japan venture was excellent. It could have been improved only by writing it twenty years earlier when most of the participants were still alive to add their views and stories to the record. My plaudits to Smith for an excellent piece of work.” – John F. Hinchey

Steven Trent Smith of Philadelphia, PA., is the author of the critically acclaimed book, “The Rescue: A True Story of Courage and Survival in World War II.” A five-time Emmy award-winning freelance TV photojournalist with a passion for history. He also wrote, “Wolf Pack.”