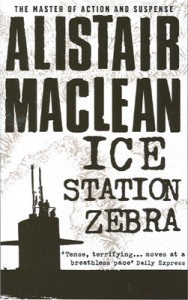 “ICE STATION ZEBRA” By Alistair MacLean. The USS Dolphin, the pride of America’s nuclear fleet, is the only submarine capable of attempting the daring rescue of a British meteorological team trapped on a polar ice cap. The officers and crew of Dolphin know well the hazards of such an assignment. The Dolphin has impossible orders: to sail beneath the ice-floes of the Arctic Ocean to locate and rescue the men of weather-station Zebra, gutted by fire and drifting with the ice-pack somewhere north of the Arctic Circle. But the orders do not say what the Dolphin will find if she succeeds––that the fire at Ice Station Zebra was sabotage, and that one of the survivors is a killer! The rescue is really a cover-up for one of the most desperate espionage missions of the Cold War. A classic thriller from the bestselling master of action and suspense. This impressive submarine novel was made into a motion picture staring Rock Hudson, Ernest Borgnine and Jim Brown. New Paperback edition, 392 pages, no photos, maps or index. Book measures 7 inches tall, 4 1/2 inches wide.

“Anyone with a taste for naval warfare, mysteries and the Arctic in general will find this a fascinating read. I first read this book in my teens. I still return to it occasionally and never find it boring. I haven’t watched the 1968 movie version of this book.” – unknown

“I have friends who found this book boring, and I think I see what they mean. “Ice Station Zebra” does not have the non-stop action pace of modern thrillers. What it does have, to an exceptional degree, is vivid characterization, enjoyable writing, and a sustained build-up of tension that enables the reader to miss the occasional hole in the plot. Something I truly love about this book is that there is no fat on its frame: no gratuitous violence, zero sex, no hype. In some ways it strikes me as a model for the successful thriller in its purest form, with everything potentially inessential stripped away, and I re-read it every year or two just for the sheer fun of it.” – R. Kunath

“What a classic! Defo one of MacLean’s best. Gripping story…you don’t have a clue what’s really happening until you get right towards the end. Great book…and a great film too…I’ve actually got the theme music in my head right now!!” – Fast Eddie

“One of Alistair MacLean’s finest suspense thrillers. It may be more well known to some readers as a movie with Rock Hudson. Suffice to say, MacLean’s novel is much better in terms of plot, suspense and coherence. The scriptwriters were morons, they should have stayed with MacLean’s plot. The movie changes the ending and, again, the ending is better in the book. So if you’ve seen the film, don’t think everything in the book is the same. It’s not. MacLean seemed to feel at home in the Arctic. Several of his novels take place in the icy area and he always writes about it with skill. If you are reading one of his Arctic novels, even if it’s July in Florida, you will feel chilled until you put the book down. The characters are well-drawn, the plot is first-rate, the writing is excellence and the twists will keep the reading guessing. The movie theme was excellent and Patrick McGoohan had a great role as the British agent in the film, but those were the only two items noteworthy in the cinema version. It’s a great cold war thriller.” – George Duncan

“Alistair MacLean’s 1963 Cold War thriller “Ice Station Zebra” opens with a British doctor named Carpenter trying to talk his way aboard the American Navy’s nuclear submarine “Dolphin” in a lonely harbor in Scotland. His announced mission is to organize the rescue of the crew of a British meteorological station on an ice island in the Arctic, victims of a deadly fire. As with many MacLean novels, neither the leading characters nor the mission are quite what they appear to be. “Ice Station Zebra” traces the Dolphin’s exciting run under the polar ice pack to reach the last know location of Ice Station Zebra. There, Dr. Carpenter and a group of volunteers from the crew of Dolphin will dare the weather and the ice pack to find the station and rescue its stricken crew. Carpenter quickly discovers that the fire at Ice Station Zebra was no accident; among the surviving members of the Ice Station is a ruthless killer who will stop at nothing, including holding at risk the Dolphin, to achieve his mysterious purpose. Carpenter himself proves to have a very personal stake in the outcome of the struggle with the killer. MacLean’s brisk prose and sardonic dialogue keep the suspense crackling to the very last page. By the time he wrote “Ice Station Zebra”, MacLean had become a highly proficient story-teller. If parts of this novel seem a little contrived, the wise reader will relax and enjoy the ride. This novel is highly recommended to fans of the Cold War spy story and to fans of Alistair MacLean, master storyteller.” – D.S. Thurlow