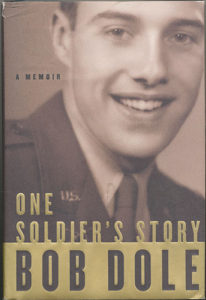 “ONE SOLDIER’s STORY” By Bob Dole. Before he became one of America’s most respected statesman, Bob Dole was an average citizen serving heroically for his country. The bravery he showed after suffering near-fatal injuries in the final days of World War II is the stuff of legend. Now for the first time in his own words, Bob Dole tells the moving story of his harrowing experience on and off the battlefield, and how it changed his life. 2005 first edition Hardback with dust jacket. 287 pages, with 23 black and white photos. No maps or index.