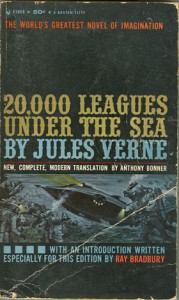 “TWENTY THOUSAND LEAGUES UNDER The SEA” By Jules Verne. (Fiction) Modern translation by Anthony Bonner. Before submarines were invented, they were imagined. Jules Verne created the fictional submarine Nautilus for this classic novel. Launched by Captain Nemo the Nautilus sails on an underwater adventure of a lifetime. Monsters, sunken treasures and the many wonders of the deep. Walt Disney produced a major motion picture based on this classic novel. 1962 Paperback edition. 371 pages, no photos diagrams or index. Front cover has a fold as noted in the above photo