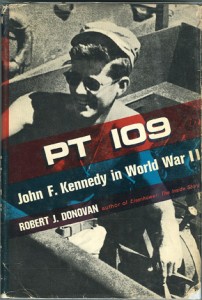 “PT-109” John F. Kennedy in World War II. By Robert J. Donovan. The World War II adventure that made a President. In the early morning of August 2, 1943, PT-109 was patrolling in Blackett Straight in the Solomon Islands. Skippered by Lieutenant John F. Kennedy, the PT boat was suddenly rammed by the Japanese destroyer Amagirl, slicing the wooden PT in half. Ten of the PT crew, including Kennedy survived the terrifying ordeal and spent 30 hours in the water before swimming to a nearby island. In 1960 John Kennedy became President of the United Starts. While writing this book, Donovan interviewed the President and several of the 109’s survivors. The book was later turned into an epic motion picture. Kennedy was assassinated in November 1963. Very popular and difficult to find in a hardback. Hardback (book club) edition with dust jacket. 221 pages, 34 black and white photos, no index. Two, large maps inside front and back covers.