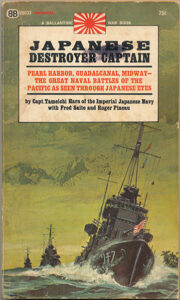 “JAPANESE DESTROYER CAPTAIN” By Captain Tameichi Hara with Fred Saito and Roger Pineau. Pearl Harbor, Guadalcanal, Midway––the great naval battles of the Pacific, as seen by Japanese eyes. One of Japan’s most famous naval heroes of World War II, Captain Tameichi Hara––”The unsinkable Captain” tells of his battles with the allies in World War II. The book has been credited with correcting errors in U.S. accounts of various battles and with revealing details of high-level Imperial Japanese Navy strategy meetings. The author, Captain Hara, was a survivor of more than one hundred sorties against the Allies. Japanese destroyers shouldered the heaviest burden of the surface war and took part in scores of intense sea battles, many of which Captain Hara describes here. In the early days of the war victories were common, but by 1943, the lack of proper maintenance of the destroyers and sufficient supplies, along with Allied development of scientific equipment and superior aircraft, took its toll. On April 7, 1945, during the Japanese navy’s last sortie, Captain Hara managed to survive the sinking of his own ship only to witness the demise of the famed Japanese super-battleship Yamato off the island of Okinawa. A hero to his countrymen, Captain Hara exemplified the best in Japanese surface commanders: highly skilled (he wrote the manual on torpedo warfare), hard-driving, and aggressive. He maintained a code of honor worthy of his samurai grandfather. Hara also gives credit to Japanese and “enemy” officers whose daring and seamanship were proved in the savage and often bloody Pacific battles. He was critical of himself and his senior commanders. The books popularity over the past forty-six years testifies to the author’s success at writing an objective account of what happened that provides not only a fascinating eyewitness record of the war, but also an honest and dispassionate assessment of Japan’s high command. 1968 Ballantine Paperback, 311 pages, 13 black and white photos and 9 maps. An appendix but no index. Very hard to find, rare edition!