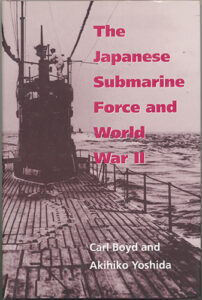 “The JAPANESE SUBMARINE FORCE And WORLD WAR II” By Carl Boyd and Akihiko Yoshida. Authors Boyd and Yoshida painstakingly record and evaluate a diverse array of material on the Japanese submarine force in World War II––much only recently declassified. The book reaches back to the development of the first Japanese sub in 1905 and continues through the 1945 surrender of the world’s largest submarine, the 5,300-ton I-400. Here is perhaps the latest information on the Japanese submarine campaign in World War II. A fully analyzed series of successes and missed opportunities in submarine operations in the Pacific, Indian, and Atlantic Oceans. A great resource book which includes an extensive appendix listing the Japanese submarine losses in WWII. This is the only Hardback edition, which quickly sold-out and now hard to find. 1995 first Hardback edition with dust jacket. 272 pages, 19 black and white photos, 14 maps a vast 51 page appendix and index.