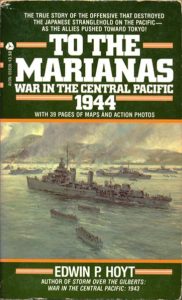 “To The MARIANAS” War in the Central Pacific, 1944. By Edwin P. Hoyt. The true story of the offensive that destroyed the Japanese stranglehold on the Pacific––as the Allies pushed toward Tokyo. Edwin Hoyt takes us into the center of combat as the American Pacific Fleet invades the Marshalls; battles the enemy at Eniwetok, Kwajalein and Saipan; captures Guam and Tinian; and, in June 1944, invades the Marianas. We are there as the U.S. strike force, finally at full strength, crumbles Japan’s defensive perimeter in the Pacific. First edition 1983 Paperback. 292 pages, 33 black and white photos, maps and an index.