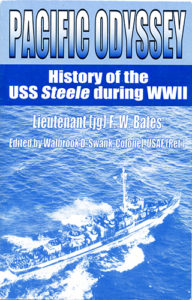 “PACIFIC ODYSSEY” History of the USS Steele During WWII. By Lieutenant (jg.) Frank W. Bates. Edited by Walbrook D. Swank, Colonel USAF (Ret.). The destroyer escort USS Steele (DE-8) was commissioned in May of 1943 and sent into the Pacific war in July. This is a brief, but exciting and true story of the USS Steele. The first of her assignments was escorting merchant ships and transports through submarine infested waters among the Solomon and Marshall Islands. In 1944 the Steele escorted convoys to Saipan, Guam, and assisted in the raids on occupied Marcus and Wake Islands. The tin can also performed duty in hunter-killer groups centered on the escort carrier USS Hoggatt Bay (CVE-75). Later in 1944, Steele, with her group, supported the amphibious assault on Peleliu and Palau Islands. The author gives a short but interesting World War II history on this somewhat unknown DE. 1998 Softbound edition. 92 pages, 4 black and white photos, 1 illustration, 5 maps and an appendix, no index. Long out-of-print.