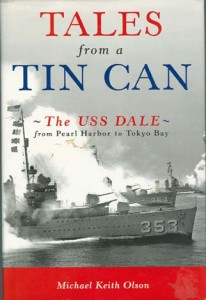 “TALES From A TIN CAN” The USS Dale from Pearl Harbor to Tokyo Bay. By Michael Keith Olson. Commissioned in 1935, the destroyer USS Dale (DD-353) was one of the few U.S. warships present at both the attack on Pearl Harbor and the Japanese surrender in Tokyo Bay. In the interim, she compiled a distinguished combat record, from fleet actions and fighting off kamikazes to more mundane tasks of escorting every sort of ship, rescuing the pilots of crashed planes (and dividing up the complimentary ice cream received from the carriers), and spending long months in dock for repairs and refits. Author Olson’s father served aboard the Dale and introduced him to a cross section of former shipmates. Olson managed to interview 44 of the veteran of the World War II destroyer, producing the first oral history of one of the vessels’ adventures over the Pacific. Personal viewpoints on everything from fleet actions to captains (some sworn by, others sworn at) to the pleasures and perils of shore leave and the endless sweat of keeping a hard-worked warship supplied and maintained. A sound addition to World War II naval literature. The veteran tales produce no new insights, but their eyewitness accounts of great and trivial events are fascinating. A dozen of the men describe the attack on Pearl Harbor, which occurred all around them, leaving their ship untouched. The men also spent nine miserable months in the Aleutians in subzero weather and stormy seas with no relief; five crew members suffered nervous breakdowns. But the Dale was a lucky ship: no sailors died in action, though all agree on the terrors of kamikaze attacks that destroyed nearby vessels. More frightening were typhoons during which everyone expected death for days on end, joining companion destroyers that sank with all hands. Between reminiscences, Olson writes a running account of the war and illuminates shipboard details readers need to know. His book is an impressive accomplishment, bringing vividly to life the actions of a single warship that fought across half the world during 1941–1945. 2007 Hardback, with dust jacket. 336 pages, 34 black and white photos, 10 maps and an index.