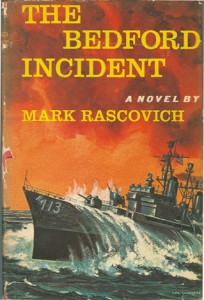 “The BEDFORD INCIDENT” By Mark Rascovich. (Fiction) Set in the cold war era, the fictional American destroyer USS Bedford plays a deadly game of cat and mouse with an unseen Russian submarine conducting an apparent military reconnaissance mission inside the Greenland––Danish territorial waters. The stress of the drawn-out conflict with the sub eventually causes the American skipper to snap. The book was later made into a major motion picture, staring Richard Widmark (as the destroyer captain) and Sidney Poitier. 1963 Hardback edition (book club) with dust jacket. 221 pages, maps inside front and back covers. Many illustrations, no photos or index. DJ has somewear and damage (see photo) now wrapped in clear protective plastic.