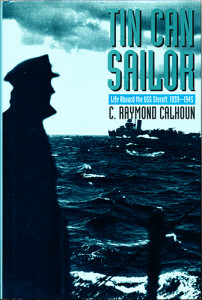 “TIN CAN SAILOR” Life Aboard the USS Sterett, 1939 – 1945  By C. Raymond Calhoun. The author boarded USS Sterett (DD-407) as an ensign in 1939 and served until 1943. While the book deals with the destroyer’s history from ’39 to ’45, Calhoun interviewed more than fifty veterans of the tin can to complete the story. Originally operating in Atlantic convoy duty during the early stages of World War II, Sterett was transferred to the Pacific in June of 1942 and saw action at Guadalcanal and Savo Island. At Savo, the little destroyer earned a Presidential Unit Citation for her “Extraordinary heroism” during the night surface action of November 12 – 13. Sterett inflected much damage to the Japanese fleet before she too was struck several times by enemy shell-fire––nearly 30 of her crew were killed. The destroyer survived the war and was decommissioned in late 1945. 1993 fHardback with dust jacket. 198 pages with 10 black and white photos. A large 23 page appendix, includes a crew roster and an index. Prior owners name inside the front dust cover.