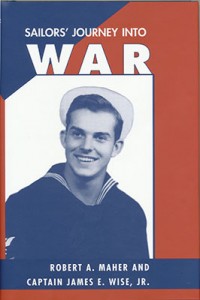 “SAILORS’ JOURNEY Into WAR” By Robert A. Maher and Captain James E. Wise, Jr. The mighty battle action fought between an American destroyer and a German U-boat north of the Azores Islands in late 1943 has been called the most spectacular surface battle since the days of John Paul Jones. Author Robert A. Maher was a young sailor who served on the American destroyer USS Borie (DD-215) in that battle, and his personal account of the war culminates in this decisive battle. As leading fire controlman and gun director above the bridge, where he had a clear view of events throughout the battle. In this nighttime action, the USS Borie turned and rammed the surfaced German U-boat and became lodged across the foredeck the U-405 submarine. In a desperate situation the crews of both vessels opened fire on one another using small arms and machine guns, at point blank range. The American’s were victorious, but their destroyer so was badly damaged she had to be abandoned. “Sailors’ Journey into War” is also the story of young men taken from the comfort of their families and hometowns and cast into a war of unimaginable proportions. Like other young servicemen, they learned their jobs and went into combat with determination and often great courage. The book opens a window into the daily lives of Navy enlisted men and accurately reflects their attitudes both as raw recruits and as seasoned sailors at the end of World War II. New hardback book with dust jacket. 207 pages, 69 black and white photos, appendix and an index. Retail price $27, save over $7

“Very solid and interesting memoir written by WWII veteran Robert Maher and co-author James E. Wise, who also co-authored “Shooting the War” by U-boat sailor Otto Giese. Like a lot of WWII memoirs the book begins briefly with the authors life pre-military service. Bored with his low level NYC insurance job the author joins the navy pre-WWII navy and is assigned to an old WWI era four stacker destroyer the USS Borie. When war breaks out the Borie is assigned to patrols on both sides of the Panama Canal. Robert begins training as a fire control director and as the memoir progresses the crew of the Borie soon become proficient sailors. A number of Robert’s and his fellow sailors experiences are described here and the stories, such as liberty or accidentally ramming a whale are interesting and told well. Eventually the Borie is assigned escort duty for convoys in the Atlantic and Mediterranean however it is then decided to make the Borie an escort in a U-boat hunter-killer group centered around the US carrier USS Card. Here the focus of the memoir changes from being centered around Bob to more about telling the story of this very successful group. The memoir ends with a very unusual battle between the Borie and the German submarine U-405. This part of the book is quite compelling and during the fight the Borie at one point rams the U-boat but eventually becomes free. The U-boat is eventually sunk however the Borie is so damaged that she eventually needs to be scuttled and some of Borie crew are lost in the cold ocean. Two things that really resonated with me was that Bob is from Kearny New Jersey, a town close to me but also the fact that my uncle Angelo was a sailor on another destroyer in the group, the USS Goff, and I remember him telling me how they rescued many of the Borie crew which Robert backs up in his book. The battle of the Borie and the U-405 eventually became a several page article in Life magazine. I also remember reading once that the ending of the Robert Mitchum movie, “The Enemy Below,” was based on this event. Although I could never get my uncle to talk enough about his experiences Robert’s memoir really flushes out the story in a way that Life or Wikipedia cannot do. As for the book my only critique, which is a small one, is that some passages seemed to me at least to need a little better editing. One thing that I liked is that there are a number of great photos provided by the author and thru archives research scattered throughout the book. If this sounds interesting to you I definitely recommend that you pick this book up! – I wonder if Robert Maher is still around today ?” – M. Casale