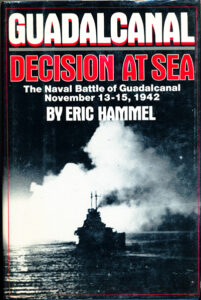 “GUADALCANAL DECISION At SEA” The Naval Battle of Guadalcanal November 13 – 15, 1942. By Eric Hammel. This is an entirely new examination in vivid detail of the Guadalcanal naval battle of November 13 – 15, 1942, a crucial step toward America’s victory over the Japanese during World War II. The three-day action was America’s most decisive surface battle of the war and the only naval battle of this century in which American battleships directly confronted and mortally wounded an enemy battleship. This victory decided the future course of the war in the Pacific. Eric Hammel has brilliantly blended the detailed historical records with personal accounts of many of the officers and enlisted men, creating an engrossing narrative of the strategy and struggle as seen by both sides. He has also included major new insights into crucial details of the battles, including a riveting account of the American forces’ failure to effectively use their radar advantage. 1988 first edition Hardback with dust jacket. 480 pages, 31 black and white photos. 7 maps, an large appendix and index.

Eric Hammel was born in Salem, Massachusetts, on June 29, 1946. He was a military historian and began to write his first book at age 15. While most of his work was focused on the Marine Corp in the Pacific War, and other military action in World War II, he also wrote about the Vietnam War and the Arab-Israeli Conflict. Hammel worked in several occupations before he settled on writing and publishing. He was formerly a stringer and contributing editor to Leatherneck Magazine. He owned and operated a publishing business under the names Pacifica Press and Pacifica Military History. Hammel died on August 25, 2020, of Parkinson’s disease.