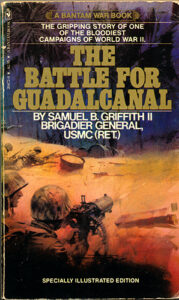 “The BATTLE For GUADALCANAL” By Samuel B. Griffith II, Brigadier General, USMC (Ret.). The 1942 struggle for the obscure Pacific Island called Guadalcanal captured the American imagination as did few other single battles of World War II. There in a campaign that raged for six-months, American’s fighting men stopped Japan’s Pacific offensive, inflected humiliating defeat on an army which called itself invincible, and gained mastery of the sea and air. It was a brutal and bloody battle that cost the lives of some 7,000 Americans and over 30,000 Japanese. This is the epic Guadalcanal as recounted by one of its heroic defenders, Samuel Griffith II. Bantam Paperback edition. 331 pages, countless illustrations with maps and an index.