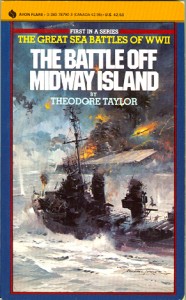 “The BATTLE Off MIDWAY ISLAND” By Theodore Taylor. June 1942. Fresh from their victory at Pearl Harbor, the Japanese have swept much of the Pacific into their iron net. Honolulu (Hawaii) is blacked-out; San Francisco (California) is under alert. But near two small Pacific islands called Midway, a devastating battle is about to erupt––a savage fight on the sea and in the air––which will turn the tide of war in the Pacific. Off Midway, two great admirals; the blue-eyed Texan, Chester Nimitz and the famed Isoroku Yamamoto, will square off in an historic confrontation dominated by a new and deadly weapon––the aircraft carrier. Off Midway, one side will score a breathtaking intelligence coup, while both sides reel from the shock of incredible blunders. Off Midway, courageous seamen and airmen will plunge into the midst of a raging battle that will leave two mighty nations changed forever. 1981 first edition Paperback, 141 pages, 2 maps, several illustrations, and an index. No photos.