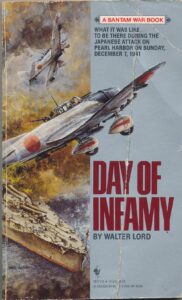 “DAY Of INFAMY” By Walter Lord. There may not be a better book on what happened at Pearl Harbor than “Day of Infamy”––and it’s not as if the Pearl Harbor story has lacked chroniclers. The December 7, 1941 Japanese attack on Pearl Harbor that precipitated U.S. involvement in World War II is described here by the participants themselves. Author Lord performed an enormous amount of research, and spent considerable time locating and interviewing survivors from both sides of the battle. Lord begins by showing how Japanese admirals, three months before their notorious sneak attack, “tested the idea on the game board at the Naval War College.” Then he proceeds briskly through the preparations for the assault and delivers a minute-by-minute account about those fateful hours in Oahu. The Japanese scan Hawaiian radio stations to see if their moves have been detected; a U.S. naval officer on “his first night on his first patrol on his first command” spots a Japanese submarine just hours before the strike; when the surprise attack finally does arrive, an excited Japanese commander shouts “Tora! Tora! Tora!” (“Victory!”) before even the first bombs have fallen. The whole assault lasted about two hours. Thousands of Americans were killed or wounded. The Navy lost the battleship USS Arizona, which blew up about 15 minutes into the raid, and 17 other warships were either sunk or crippled. Hundreds of planes were destroyed or damaged. The Japanese, by contrast, lost only 29 planes. It must be considered one of the most lopsided battles in all history. Pearl Harbor was closer to a massacre. Whatever the label, Pearl Harbor was a turning-point moment in American history, and it gave rise, the very next day, to some of the most famous words ever spoken by an American president: “Yesterday, December 7, 1941, a date which will live in infamy, the United States was suddenly and deliberately attacked….” If you intend to read only a single book on Pearl Harbor, this is the one for you.” -John J. Miller. 1988 Paperback edition, 245 pages, 17 black and white photographs, 4 maps and an index.