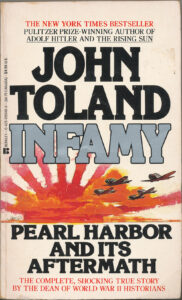 “INFAMY, Pearl Harbor and it’s Aftermath“ By John Toland. The complete, shocking true story by the dean of World War II historians. John Toland, one of America’s most respected historians, has written a shocking and revealing account of the events surrounding Pearl Harbor. Toland has uncovered evidence that President Franklin D. Roosevelt and his top advisers knew about the planned Japanese attack but remained silent so that the U.S. would be drawn into war. Even more shocking was the conspiracy afterwards to cover up the facts and find scapegoats for the greatest disaster in U.S. military history. 1983 Paperback edition, 397 pages, 41 black and white photos, appendix and index.