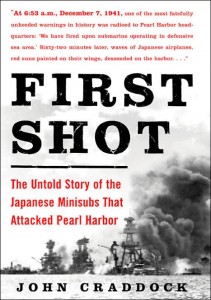 “FIRST SHOT” The Untold Story of the Japanese Minisubs That Attacked Pearl Harbor. By John Craddock. Unheeded warnings, missed opportunities, a failure to connect the dots—more than 60 ago, America was rocked by a devastating surprise attack on its Pearl Harbor naval base, one that destroyed a big part of our nation’s Pacific fleet. To this day historians argue over whether that attack could have or should have been detected ahead of time. In “First Shot,” John Craddock investigates a little-known but clear eleventh-hour warning that, had it been heeded, might have enabled the Navy’s Pearl Harbor command to blunt the Japanese assault and save ships and lives. Craddock reveals that the attack plan of Japan’s Admiral Yamamoto included five midget submarines, each carrying two men and two torpedoes. “First Shot” vividly recreates the action on the deck of the USS Ward (DD-139) on the morning of December 7, 1941 as the outmoded relic of an earlier war engaged a tiny, state-of-the-art undersea fighting machine. Reconstructing these events from original and primary source materials as well as new revelations from the discovery in August 2002 of the minisub sunk by the Ward, Craddock poses and answers a number of questions: Why was the Ward’s urgent message ignored by Pearl Harbor command? Why would Admiral Yamamoto, son of a samurai warrior and a brilliant strategist and tactician, jeopardize his surprise attack by trying to penetrate Pearl Harbor’s sea defenses with five midget submarines that could inflict only limited damage? How might an advance warning of even one hour have changed the American response to the attack?

Craddock further reveals that Japan’s use of midget submarines was not limited to the Pearl Harbor attack. Hundreds were built, and Yamamoto deployed them repeatedly as the war unfolded. Even in the Pearl Harbor attack the two-man crews knew they had little chance of survival; as Japan’s early successes were replaced by stalemate, then losses, and finally a desperate endgame, the crews accepted—even welcomed—that their missions were suicidal. Kazuo Sakamaki, the only survivor among the midget sub crews in the Pearl Harbor attack, was also America’s first Japanese POW. To be captured was to dishonor his family and his motherland, and Sakamaki repeatedly attempted suicide after being shipped to a prison camp in Wisconsin. His is a poignant story of a soldier’s defeat, despair, and ultimate redemption. “First Shot” molds a forgotten piece of history into a fascinating narrative—a bittersweet tale of duty done and duty shirked; bold successes and calamitous failures; and the undeniable fact that, in the broad course of historic events, the actions of ordinary individuals can change everything. New hardback edition, 255 pages, 17 black and white photographs, 4 maps, 1 diagram with an index. Retail was $24.95

“The midget subs launched into the attack at Pearl Harbor is an interesting small part of the whole Pearl Harbor story. The story of the ‘Ward’ firing on the sub is well know. We know that the ‘Ward’ then reported the incident and that it was ignored, beginning a long sequence of What If’s. This book tells the story of the midget subs at Pearl. It also goes into the story of midget subs in general from the Italian frogmen, the British designs, and more. Other incidents in the war that touch on the subject are covered as well, such as Yamamoto and his meeting with the P-38’s. Two points particularly stand out. His analysis of the Japanese view of the war. The abject denial that seems to be underway in Japan as if they were going along one day and then the atomic bombs began to fall. Second is his story of the sub the ‘Ward’ fired on. He didn’t finish the story until the Epilogue at the end of the book, so I’m not going to say what happened. After all, if I had to wait and wait and wait until reading to the end of the book you should too. All I can say is that it’s a good thing that the book was so interesting as to make it worth the wait.” – John Matlock

“I know for a fact that Julia Craddock was the inspiration of this book. This book provides you with factual information and it keeps you on the edge of your seat. I would most definitely recommend this book because it is AMAZING!!” – Ingrid Garvey

“I came across this book shortly after I saw Pearl Harbor for the first time. It was fascinating to be able to visualize the location and think about how things might have been different. Particularly, just after the visit, the book helped me to realize the true magnitude of the tragedy of that day. . . I recommend it to anyone with an interest in WWII, or just history itself and the way seemingly random events can have such impact on how it is formed.” – Blythe F. Toussaint

“Sent ahead of the air assault on Pearl Harbor, a Japanese mini sub was destroyed, nearly destroying Japan’s deadly surprise. If we had only known even a bit of what John Craddock tells us noe, our own history could have been so very different.” Sherry Sontag, co-author of “Blind Man’s Bluff.”

John Craddock is the president of ProMedia, Ltd., a book packaging company, and he helped launch a series of guidebooks for The History Channel. A former newspaper reporter and magazine publisher, Craddock has written several other books as well as articles for national publications, including the New York Times.