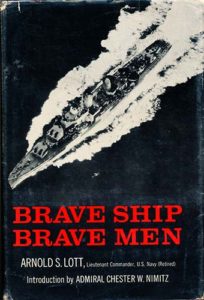 “BRAVE SHIP BRAVE MEN” By Lieutenant Commander, Arnold S. Lott, USN (Ret.). Introduction / Foreword by Fleet Admiral Chester W. Nimitz, USN. Author Arnold Lott masterly depicts the heroism of U.S. naval forces in the Pacific during World War II by telling the true story of the USS Aaron Ward (DM-34), an American destroyer-turned minelayer on the radar picket lines off the island of Okinawa. Focusing on the events of May 3, 1945, Lott describes a fierce and bloody fifty-two minute battle when six direct kamikaze hits set the Aaron Ward afire from bow to stern. Forty-two crew members burned to death or were blown overboard, but the “Aaron Warriors” kept their ship afloat and eventually sailed her back to the United States to the proud acclaim of Fleet Admiral Chester W. Nimitz. Writing an exciting narrative on long book entries, Lott skillfully unfolds that dramatic day in May that began so routinely and ended in such chaos. The action and suspense subside only on the last page of the book. Through the use of flashbacks Lott also covers the entire life of the ship and vividly portrays many of her officers and men. 1964 first edition, Hardback with dust jacket. 272 pages, no photos, maps or index. Entire crew roster included in this book.