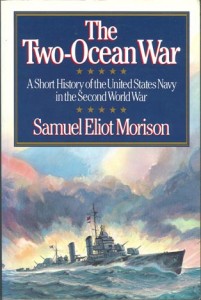 “The TWO-OCEAN WAR” A Short History of the United States Navy in the Secord World War. By Samuel Eliot Morison. The greatest naval force in history was assembled by the United States to fight a global war at sea during World War II. Two-time winner of the Pulitzer Prize, Samuel Eliot Morison, was the official historian of that remarkable effort. Comprehensive and immensely readable, this book covers the exploits of the U.S. Navy from the pre-Pearl Harbor buildup to the final and grudging surrender of the Japanese, including submarine warfare in the Atlantic. The battles of the Coral Sea and Midway, Guadalcanal, the leapfrogging campaigns among the Pacific islands, and the penultimate blazes of glory at Leyte Gulf and Okinawa. Full of the drama and excitement of war at sea, the “Two-Ocean War” is rich enough to display the glory of individual heroism, and full enough to consider the arguments over the strategy between Winston Churchill and Admiral Ernest King, General Douglas MacArthur and Admiral Chester Nimitz and to reveal major errors on our side as well as the enemy’s. The complete definitive one-volume history, lavishly illustrated with maps, charts and photographs. 1989 Softbound edition. Book measures 9 by 6 inches and 1 ½ inches thick. 611 pages, 35 black and white photos, 54 maps and charts. One large pull-out chart / map of the Pacific theater of operations. Includes an index.