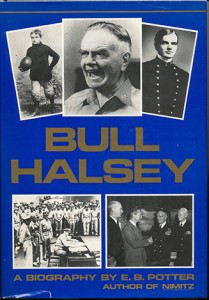 “BULL HALSEY” A Biography by E. B. Potter. This is the first comprehensive biography of Admiral William F. Halsey, the best-known American naval hero of World War II. Drawing on unpublished memoirs, oral histories, and interviews with relatives and military colleagues, Potter has constructed a scholarly and highly readable account of the life of this colorful, bold, controversial leader. The last of the great swashbuckling sea dogs, Halsey was one of the key figures in the defeat of Japan. His strategical decisions during the Battle for Leyte Gulf, however, have been debated for over 40 years. Here the issue is explained with clarity, and readers can draw their own conclusions. Halsey was the only military man of comparable rank who was able to work harmoniously with General Douglas MacArthur. Potter not only explains why this was so but provides new material on that increasingly maligned general in his account of the Halsey-MacArthur partnership during the South Pacific campaign. While Potter brilliantly illustrates Halsey’s ability as a leader and tactician, he candidly admits to the Admiral’s shortcomings and explains the reasons behind his most controversial decisions; the Battle of Leyte Gulf and the typhoon incidents of 1944 and 1945. Three years after assuming command of the southwest Pacific, a triumphant Halsey led the Third Fleet into Tokyo Bay to accept the Japanese surrender. No man did more to assure U.S. victory in the Pacific. Potter served in the U.S. Navy during World War II and rose to the rank of Commander. E.B. Potter also wrote “Nimitz”. 1985 Hardback edition with dust jacket. Lower front of dust jacket has a small tear, now repaired from the inside, see above book photo. 421 pages, 18 black and white photos, 16 maps and an index. Large map of the Pacific inside the front and back covers.