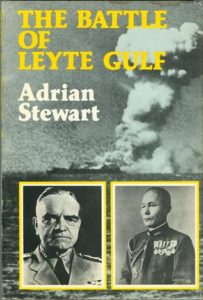 “The BATTLE Of LEYTE GULF” By Adrian Stewart. Leyte Gulf was the last of the great naval battles. Spanning three days in October (23rd to the 25th) 1944, the battle proved to be the end of the once mighty Imperial Japanese Navy and the World’s largest naval battle, which resulted in an American victory. Every type of military vessel and aircraft took part in the conflict, including powerful battleships and aircraft carriers, cruisers, destroyers, submarines, fighter and suicide planes. Thousands of lives were lost on both sides. And countless ships were sunk. In this dramatic and detailed account of the Battle of Leyte Gulf, Adrian Stewart examines the differing aims and outlooks of the American and Japanese commanders, as well as the crucial decisions made on both sides. 1979 Hardback (Book Club) edition with dust jacket. 224 pages, 28 black and white photos, 3 maps and index.