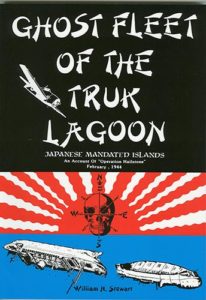 “GHOST FLEET Of The TRUK LAGOON” An Account of Operation Hailstone February 1944. By William H. Stewart. During World War II Truk was a major Japanese logistical base as well as the operating home base for the Imperial Japanese Navy’s Combined Fleet. Located in the Caroline Islands, some have described Truk as the Japanese equivalent of the U.S. Navy’s base at Pearl Harbor, HI. The Pacific atoll was the only major Japanese airbase within range of the Marshal Islands and was a significant source of support for Japanese garrisons located on islands and atolls throughout the central and south Pacific. On February 16, 1944 the U.S. Navy staged a massive naval air and surface attack against the Japanese naval and air base at Truk. The strike lasted thru February 17 and completely surprised the Japanese. The daring raid devastated Truk, in a battle that later became known as the “Japanese Pearl Harbor.” In “Ghost Fleet of the Truk Lagoon” author William Stewart revisits this famous battle and brings his first hand-knowledge of “Operation Hailstone.” Laced with historic black and white photos, including some of the 1944 attack. Stewart’s book is not only a valuable reference but also one of the only books that tells the entire story of this battle. Some 60 Japanese ships and hundreds of airplanes were totally destroyed in Truk Lagoon in February 1944. Nowadays Truk is a popular destination for wreck divers, interested in viewing and or photographing the ships and planes that still rest on the floor of the lagoon. Softbound book, measuring 7 by 10 inches, 132 pages, 49 black and white photographs, 5 color photos, 11 maps and an appendix, no index. Long out-of-print, a. must-have for all naval history buffs.