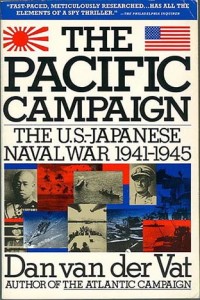 “The PACIFIC CAMPAIGN” The U.S. – Japanese Naval War 1941-1945. By Dan van der Vat. Drawing on neglected archives of firsthand accounts from both sides of the war, van der Vat interweaves eyewitness testimony with sharp, analytical narration. His book provides a penetrating reappraisal of the strategic and political background of the Japanese and American forces, as well as a major reassessment of the role of intelligence on both sides. A comprehensive evaluation of all aspects of the war in the Pacific, “The Pacific Campaign” promises to be the stand work on the U.S. – Japanese war for years to come. From the rise of the Japanese Empire to their eventual surrender in September 1945 its all here in this one volume. 1992 Softbound edition (9 X 6 inches). 430 pages, a staggering 57 black and white photographs and 10 maps.