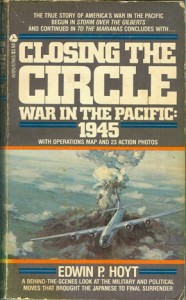 “CLOSING The CIRCLE” War in the Pacific, 1945. By Edwin P. Hoyt. A behind-the-scenes look at the military and political moves that brought the Japanese to final surrender (in 1945). The stirring account of the last sixty days of action in the Pacific. Behind-the-scenes stories of the escalating tensions between the British and the American commands. Russia’s last-minute entry into the Pacific war… the high-level military and political strategy geared to bring the war to an end. The book also describes the fateful decision that brought the Japanese nation to immediate surrender… the dropping of two atomic bombs. Paperback, 240 pages with 23 black and white photos, 1 map and an index.