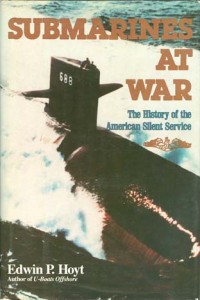 “SUBMARINES At WAR” The History of the American Silent Service. By Edwin P. Hoyt. From the author of “The Destroyer Killer” and “Bowfin.” An authoritative history of American undersea (submarine) warfare from the nuclear-powered navy of today all the way back to the American Revolution. Includes much about World War I and World War II. True stories of great heroism and self-sacrifice. The book devotes special attention to the war with Japan (1941 to 1945) and the controversy over the troublesome American torpedoes. 1983 Hardback edition with dust jacket. 329 pages, 47 black and white photos, 4 maps diagrams and an index.