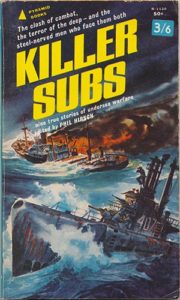 “KILLER SUBS” Edited by Phil Hirsch. Nine thrilling chapters, by nine different authors, each with a unique and true story on underwater warfare. Most of the stores are from World War II. Some of the more famous subs in this book includes: USS Harder (SS-257), USS Bergall (SS-320) and the tragic sinking of the USS Squalus (SS-192). Never produced in a hardback, and becoming very difficult to find. This is a 1965 first edition Paperback. 127 pages, no photos, maps or index. Book color cover artwork is very impressive, see above photo