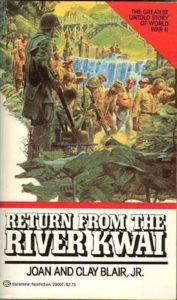 “RETURN From The RIVER KWAI” By Joan and Cay Blair, Jr. After allied POWs built the River Kwai bridge the Japanese rounded up their American and British prisoners and sent them to Japan to work in factories and mines. More than 2,000 of the POWs were jammed into the Japanese vessels; Rakuyo Maru and Kachidoki Maru for the long sea voyage. Before they could reach Japan however, American submarines USS Pampanito and USS Sealion sank both ships, unknowingly killing many of the helpless POWs. When American intelligence discovered there were allied POWs aboard the stricken ships, Barb (SS-220), Pampanito (SS-383), Sealion (SS-315) and Queenfish (SS-393) were rushed back to the scene for a bold mid-ocean rescue mission. This true story is told by the author of “Silent Victory,” Clay Blair and his wife, Joan. And exciting story from World War II. Paperback edition, 335 pages, 4 maps, no photos. 27 page appendix with index.