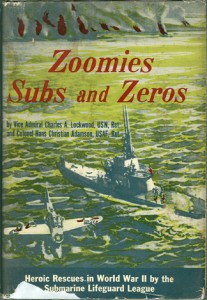 “ZOOMIES SUBS And ZEROS” Heroic Rescues in World War II by the Submarine Lifeguard League. By Vice Admiral Charles A. Lockwood, Jr. USN (Ret.) and Colonel Hans Christian Adamson, USAF (Ret.). Foreword by Vice Admiral Charles A. Pownall, USN (Ret.). From the authors of “Hellcats of the Sea.” Not all of the American submarine missions of World War II were designed to “Sink ‘Em All.” By the summer of 1943, the submarine Lifeguard League had been established. Their mission: to rescue downed flyers, called “Zoomies” in the Silent Service. In this rare out-of-print book, the epic story of how hundreds of aviators were saved from certain death by thirst, man-eating sharks or by murderous enemy planes. This is the World War II story of heroic rescuing submarines such as; Harder, Tang, Finback, Stingray, Scabbardfish and many, many others. 1956 Hardback edition with dust jacket. This ultra-rare book was never published in paperback. 301 pages, 17 black and white photos with two different maps inside the front and back covers, no index. A former library book, dust jacket now covered in new protective clear plastic.

Colonel Hans Christian Adamson, USAF, (Ret.): Like his coauthor, Charles Lockwood, Col Hans Adamson was also born in 1890. In 1942, Adamson was on a flight over the Pacific in a B-17 Flying Fortress. Off course and running low on fuel the 4-engine bomber was forced to ditch in the sea. Among the crew was famed World War I fighter ace, 52 year old Captain Eddie Rickenbacker and six others. The men drifted on rubber rafts for 23 days before being rescued. As Chief of the USAF Personnel Narrative Office, Colonel Adamson directed the collection and writing of all the human interest history of the Army Air Force in all theaters of war––frequently under most hazardous conditions. He coauthors several other books with Vice Admiral Charles Lockwood, USN (Ret.), including “Through Hell And Deep Water” and “Hell At 50 Fathoms.”