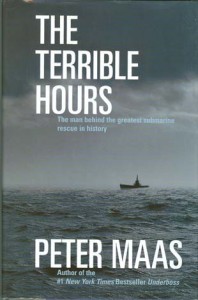 “The TERRIBLE HOURS” The Man Behind the Greatest Submarine Rescue in History. By Peter Maas. On the eve of World War II, America’s newest submarine plunged helplessly to the North Atlantic bottom during a test dive. The USS Squalus (SS-192) had gone down off the Isles of Shoals on the morning of May 23, 1939. It was later believed a failure of the main induction valve caused the flooding of the aft sections of the boat, quickly drowning 26 helpless sailors. Prompt action by the crew prevented the remainder of the submarine from flooding. Upon hearing the news of the sinking, young Lieutenant Commander Charles ‘Swede’ Momsen races to the rescue! Until his advent, it was accepted that if a submarine went down, her crew was doomed. But Momsen, in the face of an indifferent, often sneering naval bureaucracy, battling red tape and disbelieving naysayers every step of the way, risked his own life again and again against the unknown in his efforts to invent and pioneer every escape and rescue device, to save an entombed crew. Miraculously, 33 crew members still survived in the stricken sub resting on the bottom at a depth of 243 feet. But time was running out and Momsen needed to get the men out of the submarine before their limited air supply expired. Prizewinning author, Peter Maas brings in vivid detail a blow-by-blow account of the 1939 disaster of the Squalus and the subsequent rescue of her trapped crewmen. This book was a “New York Times Bestseller” and later made into a TV movie titled “Submerged.” Hardback edition with dust jacket. 309 pages, no photos, maps or index.

“Peter Maas has a gift. His words make men and women whom we’ll never know personally come alive. In his telling of the tale of the Squalus, Maas also provides a shocking glimpse into the rigidity of the pre-World War II Navy, presents a picture of domestic life that we no longer enjoy (and probably are worse off for it) and the willingness of men to willingly endure danger. It is also the story of one very brave, very determined man who fought a stolid bureaucracy in order to save the lives of his comrades. Maas’ reporting – and that’s what it really is––is solid. He never gets into phony histrionics, but his descriptions of the reality are frightening––you can imagine the terror of being trapped in a submarine, 240 feet below the surface, not knowing if you will be dead or alive in a matter of hours. Maas also captures the unassuming and unfailing courage of the rescuers who fight inadequate equipment, foul weather and fate itself. The Terrible Hours is adventure of the most terrifying kind because it recounts a reality most of us could never endure.” – Jerry Saperstein

“This book is a MUST read for anyone interested in U.S. Navy history. Maas’s account of the loss of the USS Squalus & subsequent rescue efforts is exceptionally well done. The reader truly feels what it must have been like for the 33 crewmen trapped in their crippled submarine at the bottom of the North Atlantic as they prayed for rescue. The book also provides a biography of U.S. Navy officer “Swede” Momsen. Often at the risk of his own life, & sometimes with minimal support from the Navy, Momsen developed the deep-sea diving devices that made it possible to attempt the rescue.” – unknown reader

“I have been a (US Navy qualified) diver since 1958. Momsen has been a household name for years but I had never heard his story. This book filled that gap. Great story, well told.” – Dwain Colby

“This book is expertly written by a very popular author and contains every emotion you can imagine. It’s a true life story of a dangerous rescue at sea set off the New England coast. It’s hard to put this book down. It’s as exciting as the most well written mystery. It’s truly one you will remember.” – O. Bratland

“I’ve long been a fan of the late Peter Maas. I liked Serpico and Underboss, and now this riveting military history about the Squalus submarine. This is a satisfying story as well, not just because of the successful rescue operation but because the good guy (“Swede”) prevailed. Swede’s leadership as portrayed by Maas was stunning. I think almost anybody would appreciate this book.” – Citizen John