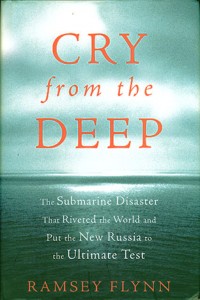 “CRY From The DEEP” The Submarine Disaster That Riveted the World and Put the New Russia to the Ultimate Test. By Ramsey Flynn. On August 12, 2000, the giant Russian nuclear submarine Kursk sank in the icy waters of the Barents Sea. As the 118-man crew struggled to survive, the Russian Navy failed to notice the unfolding tragedy, even as Western observers immediately alerted leaders in the United States and England to the explosion. Why then did Western officials, in a practiced silence reminiscent of the Cold War, fail to notify Vladimir Putin and his new post-Soviet government of the disaster? Why did the Russian government later rebuff international rescue attempts even amid early reports of faint tapping’s coming from inside the submarine? And when, if ever, would a new Russia emerge from the specter of its Cold War past? A gripping account of the disastrous Russian nuclear submarine explosion that killed the entire crew. What were the Russian’s thinking when they waited 48 hours to acknowledge their most prized submarine was in trouble? To a world community still mystified by deadly Russian deceits surrounding the Kursk sub disaster, author Ramsey Flynn’s book uncovers the truth once and for all. “Cry from the Deep” has quickly become the definitive account of this pivotal moment in modern Russian history, as an angry Russian people—aided and abetted by a fledging independent media—openly clashed with Vladimir Putin and his new government’s Soviet-ear tactics of secrecy and deception. Thrilling, heart-wrenching, and absorbing, “Cry Form The Deep” untangles, the knotty Soviet-era deceptions and conspiracies surrounding the submarine disaster that devastated the Russian people and shocked the world. 2004 first edition Hardback with color dust jacket. 282 pages, 29 black and white photographs, 4 maps, 1 submarine diagram and an index.