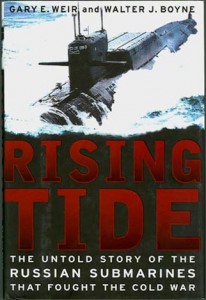 “RISING TIDE” The Untold Story of the Russian Submarines that Fought the Cold War. By Gary E. Weir and Walter J. Boyne. Of all the secrets the Soviet Union kept, none were more closely guarded than those involving their submarines. Throughout the Cold War, Soviet submarines patrolled the world’s oceans, playing a deadly game of cat-and-mouse with their American counterparts in a silent struggle hundreds of feet below the surface. For the first time, “Rising Tide” tells the Soviet side of these secretive operations. Drawing on newly available archives, as well as interviews with a dozen former Soviet commanders––access never before granted to Western researchers––this gripping narrative shows that confrontations between nuclear-armed subs were far more dangerous than we ever thought. “Rising Tide” recounts successful Soviet operations, including top-secret exercises off the American coast, and espionage coups, such as the spy-ship that monitored American missile tests off the Florida coast and then collected the debris in full view of the United States Navy. All too common were the near-misses, heroic rescues, and deadly catastrophes that plagued Soviet submarines over the years, including the horrific nuclear accident on board the ill-fated K-19, later nicknamed the “Hiroshima”; the internal fire that sank the K-8 in 1970 with twenty-two sailors on board, and the dramatic escape of crewmembers from the Komsomolets in 1989. Russian submariners fought two battles in the Cold War: one against their American opponents, and another against the cruel Soviet leadership that knowingly put their lives at risk and caused so many needless deaths. “Rising Tide” also provides dramatic first-hand evidence that the final decision to launch a nuclear weapon resided solely in the hands of the Soviet sub commanders. From the Cuban Missile Crisis to the tragic sinking of the Kursk in 2000, “Rising Tide” offers an extraordinary insider’s history of the Soviet submarine service, and sheds new light on the darkest secrets of the Cold War. 2003 Hardback with dust jacket. 354 pages, 28 black and white photos 1 diagram, an index but no maps. This title is out-of-print!