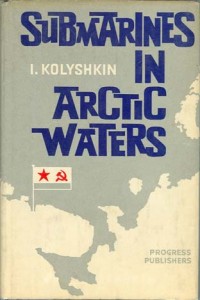 “SUBMARINES In ARCTIC WATERS” By I. Kolyshkin. Later published in Paperback as “Russian Submarines In Arctic Waters.” During World War II, the Russian’s were American Allies. This is the true and untold story of how Russian submariners fought Hitler’s U-boats and relentlessly hunted down enemy ships from beneath the World’s cruelest sea––the North Atlantic. They faced a superior enemy, trained and arrogant. Without regard for their own losses they went to sea again and again. Some returned victorious––many died. A very difficult book to find! 1966 first edition Hardback with dust jacket. 253 pages, 1 black and white photo, no maps or index.