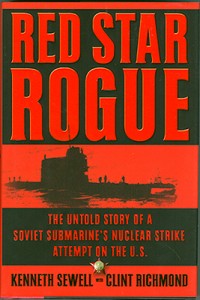 “RED STAR ROGUE” The Untold Story of a Soviet Submarine’s Nuclear Strike Attempt on the U.S. By Kenneth Sewell with Clint Richmond. Early in 1968 a nuclear-armed Soviet submarine sank in the waters off Hawaii, hundreds of miles closer to American shores than it should have been. Compelling evidence, assembled here for the first time, strongly suggests that the sub, K-129, sank while attempting to fire a nuclear missile, most likely at the naval base at Pearl Harbor. We now know that the Russian’s had lost track of the sub; it had become a rogue. While the Soviets searched in vain for the boat, U.S. intelligence was quickly able to pinpoint the site of the disaster. The new Nixon administration launched a clandestine, half-billion-dollar project to recover the sunken K-129. Contrary to years of deliberately misleading reports, the recovery operation was a great success. With the recovery of the submarine, it became clear that the rogue was attempting to mimic a Chinese sub, almost certainly with the intention of provoking a war between the U.S. and China. This was a carefully planned operation that, had it succeeded, would have had devastating consequences. During the successful recovery effort of K-129, the U.S. forged new relationships with the USSR and China. Could the information gleaned from the sunken submarine have been a decisive factor shaping the new policies of détente between the Americans and the Soviets, and opening China to the West? And who in the USSR could have planned such a bold and potentially catastrophic operation? “Red Star Rogue” reads like something straight out of a Tom Clancy novel, but it is all true! Today our greatest fear is that terrorists may someday acquire a nuclear weapon and use it against us. In fact, they have already tried. Used hardback with dust jacket, 305 pages, 23 black and white photographs, 3 diagrams, 2 maps and an index.

“This book was very informative. It was accurate. I knew of the incident, but not the particulars, and this book went into detail. My overall opinion is this book would have been cheap at 10 times the price. It should be required reading in history classes.” – Floyd L. Pierce

“A plausible interpretation of events, with the interesting backdrop of Cold War history. Could someday be the basis for a good submarine fiction movie production.” – C. Koller

“I just completed reading “Red Star Rogue.” It was compelling because I was in Hawaii on that date––March 7, 1968. While there certainly is strong evidence to support the authors hypothesis, in the form of photographic evidence, satellite surveillance, hydrophonic signatures, the analysis of the oil slick by the University of Hawaii, and the subs departure from normal operating procedure, there were two questions that I felt were not adequately addressed. The foremost being the issue of the fail safe device. In his book Sewell states that missiles were delivered to K-129 before departure on their ill fated mission. The KBG had control of all nuclear warheads in the USSR. The KBG was part of the plot. Why didn’t the KBG remove the fail safe device on these missiles so that no code, held by multiple parties, was needed to launch them? Second, of lesser importance, how did the Soviets finally determine there were 98 men on board the sub? No crew manifest was ever found according to Russian sources. Is this information that was obtained from an internal Soviet investigation after information on the K-129’s mission was shared with Bresznev? The author does not explain either of these two important points.” – Anthony Tome, Boulder, CO.

“In “Red Star Rogue: The Untold Story of a Soviet Submarine’s Nuclear Strike Attempt on the U.S.”, former American submariner Kenneth Sewell, in collaboration with journalist Clint Richmond, reexamines the 1968 loss of K-129, a Soviet Golf II-class missile submarine. Revisiting this well-known story and the CIA’s aborted effort to recover the hull under the guise of the highly classified Project Jennifer, the author argues that K-129 actually attempted to launch a nuclear weapon against the U.S. naval base at Pearl Harbor. He portrays this as part of an effort by Politburo hardliners to arrest what they perceived as the beginning of a rapprochement with the United States and a liberalization within Soviet society under Leonid Brezhnev. Sewell builds a fast-paced, circumstantial case for the existence of this political environment in the Politburo and for the plot it might have inspired under the direction of the conservative communist ideologue…” – Gary E. Weir

Kenneth R. Sewell is a nuclear engineer and a U.S. Navy veteran who spent five years aboard the USS Parche (SSN-683), a fast-attack submarine. During the cold-war era Parche conducted a number of special operations, some of which were revealed in the book “Blind Man’s Bluff.” Since leaving the Navy, Sewell has held both Department of Defense and Department of Energy security clearances. In researching his book “Red Star Rogue,” Sewell had access to recently declassified intelligence files in the U.S. and Soviet military archives. Sewell also co-wrote “All Hands Down” a book dealing with the mysterious sinking of the American submarine USS Scorpion in 1968.

Clint Richmond is a veteran journalist and author based in Austin, Texas. His book Selena!, about the murder of the legendary Tejana singer was a #1 bestseller.