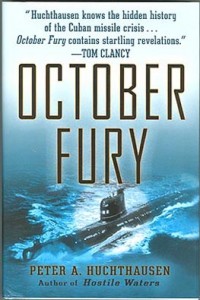 “OCTOBER FURY” By Peter A. Huchthausen. Drama on the high seas as the world holds its breath! It was the most spectacular display of brinkmanship in the Cold War era. In October 1962, President John F. Kennedy risked inciting a nuclear war to prevent the Soviet Union from establishing missile bases in Cuba. The risk, however, was far greater than Kennedy realized. “October Fury” uncovers startling new information about the Cuban missile crisis and the potentially calamitous confrontation between U.S. Navy destroyers and Soviet submarines in the Atlantic. Peter Huchthausen, the author of “Hostile Waters” and a man who served as a junior ensign aboard one of the American destroyers (USS Blandy), reveals that a single shot fired by any U.S. warship could have led to an immediate nuclear response from the Soviet submarines. The subs were equipped with nuclear-tipped torpedoes and had been given secret orders to use those new and virtually untested weapons if American forces attacked them or if American submarine-hunting destroyers forced them to the surface. That set of circumstances came very close to leading to an exchange of tactical nuclear weapons––an event that likely would have sparked nuclear war between the United States and the Soviet Union. This riveting account re-creates those desperate days of confrontation from both the American and Russian points of view and discloses detailed information about Soviet operational plans and the secret orders given to submarine commanders. It provides an engrossing, behind-the-scenes look at the technical and tactical functions of two great navies along with stunning portraits of the officers and sailors on both sides who were determined to do their duty even in the most extreme circumstances. As absorbing and detailed as a Tom Clancy novel, this real-life suspense thriller is destined to become a classic of naval literature. This new hardback has 281 pages, 22 black and white photographs, 2 maps, 1 diagram and an index. Retail price $24.95, save $5.

“This book is a very detailed account of the Cuban Missile Crisis, as told by both the Russian submariners tasked to get through to Cuba and the American destroyers bent on stopping them. In 1962, the decision was made to station both land-based nuclear missiles and nuclear-armed bomber, as well as SSB submarines armed with nuclear missiles in Cuba. The land-based portion, dubbed Operation Anadyr, would use cargo ships to deploy the land based missiles, bomber and troops. The Naval operation, Kama, was to be initiated by four Soviet Project 641 Foxtrot diesel attack submarines, sailing from the Kola peninsula bound for Cuba. These would act as an advanced guard, to be followed by seven Project 629 Golf class ballistic missile submarines, each carrying three nuclear-tipped missiles. The plan was for these submarines to be based out of Cuba, where they could threaten the southern U.S. Just prior to departure, each of the Foxtrot submarines received, in addition to their normal torpedo loads, one 10 kiloton T-5 nuclear torpedo. Admiral Gorshkov’s orders were; “You will use these weapons if American forces attack you submerged or force your units to the surface and the attack….” The fate of the world was thereby placed in the hands of four Russian submarine commanders. The book skillfully weaves the ensuing tale, alternating the Soviet submariner’s stories with the American destroyer’s ASW pursuits as the crisis progresses. A showdown in which USS Blandy drops small charges to force one of the submarines, B-130, to surface, leads to frustration for the submarine captain. He therefore orders loading and flooding, in preparation for firing, of the torpedo tube with the T-5 nuclear warhead. Fortunately, cooler heads prevail upon the captain to back down. Although overall a good read, I had a few minor quibbles. The author uses interviews to reconstruct conversations, and the places them in quotes. In fact it is highly unlikely that those represent the actual words spoken, as quotes imply. He also has two Russian attaches taking the train to Boston in order to observe the submarines at the New London sub base when the train stops in New London. In fact, Electric Boat is visible across the river, but the submarine base and piers are not at all visible from the train. The closest approach of the train is on the bridge over the Thames River, still some distance, with the sub base some 3 miles away. Nonetheless, this book lends new insights into just how close the world really came to disaster during that alarming time in history. The author was on board one of the American destroyers, USS Blandy, assigned to the USS Essex task force group, and thus tells tale that from a first hand perspective.” – Thomas J. Dougherty

“I bought this book because I was offended by the hype on the dust cover, which presented it as another Kennedy Court History in which the Cuban Missile Crisis is made to sound even more scary than it really was. It was a pleasant surprise to read a balanced account of Soviet submarine operations during the Crisis, which refutes many of the exaggerated claims still being made about the possibility of unauthorized use of tactical nukes. We learn that Soviet nuclear torpedoes were escorted by armed KGB officers who actually slept on top of the weapons, and the Rules of Engagement were so onerous that a sub would have to be actually sinking before one could be fired. Just to be safe, the sub crews were given no training on the nukes and were kept ignorant of their capabilities. This isn’t too surprising when one considers that a military coup was always the secret nightmare of communist governments. If the tactical nukes assigned to Soviet Army units in Cuba were under similar restrictions, it is hard to see how they could ever have been fired––the nightmare scenario still being cited by Robert MacNamara to justify the Kennedys’ secret treaty with Khrushchev. Another revelation is the very poor mechanical performance of the Soviet subs which suffered an appalling series of engine breakdowns. From the limited details given in this book, it appears that many of these failures were due to mistakes by poorly trained engineering personnel. (Fatigue due to the intense tropical heat and humidity may be a factor also.) Since these subs had specially selected crews and were just out of refit, the mind boggles at what the average Soviet diesel boat must have been like in 1962. Had Khrushchev actually proceeded with his plan to base Golf-class missile subs permanently in Cuba, the result could only have been utter disaster. The more we learn about the Soviet side of the Missile Crisis, the more it looks like the most badly planned and implemented military operation of all time.” – Jeffrey F. Bell

Peter A. Huchthausen graduated from the U.S. Naval Academy in 1962 and had a long and distinguished naval career, culminating in an appointment as naval attaché to Moscow during the dissolution of the USSR. After he retired from the service in 1990, Huchthausen returned to Moscow and began writing. His first book, “Echoes of the Mekong,” was published in 1996. Peter Huchthausen also co-wrote “Hostile Waters.”