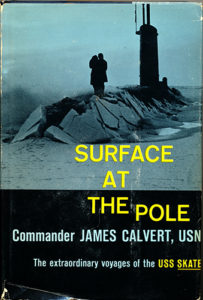 “SURFACE At The POLE” The Extraordinary Voyages of the USS Skate. By Commander James Calvert, USN. The commander of the nuclear-powered submarine USS Skate (SSN-578) describes his two celebrated voyages beneath the frozen crust of the top of the World. One on August 1958, the other in the dead of Arctic winter, March 1959. The famous cruise of her sister ship USS Nautilus (SSN-571), completed only a few days before the Skate reached the ice pack, proved that a submarine could cruise beneath the ice. The book largely derives from the skill with which Commander Calvert tells his impressive story. Calvert served in submarines during World War II, and wrote the book, “Silent Running.” 1960 Hardback edition with dust jacket, 221 pages, 20 black and white photos. USS Skate crew roster and index. USS Skate submarine diagram and map, inside front and back covers. Dust jacket has some moderate damage as noted in book photo above.

The Sinking of the Belgrano