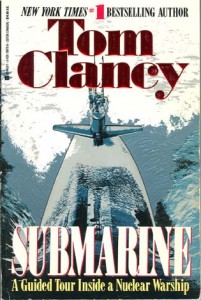 “SUBMARINE” A Guided Tour Inside a Nuclear Warship. By Tom Clancy. Foreword by Vice Admiral Roger Bacon, USN. The most unusual book Clancy has ever written. Never before seen by the general public; a rare glimpse inside a Los Angeles-class nuclear attack submarine. This book includes exclusive photographs, illustrations and diagrams. The fascinating history and evolution of submarines and a brief look at Russian subs. Mock war scenarios and weapons launch procedures, an inside look at life on board a nuclear submarine; from the captain to crew, from training exercises to sub operations. A 53 page chapter covering “Other Peoples Submarine”, where the author has data and photos of sub from, Russia, China, France, the UK, Sweden, Germany, Japan and others. 1993 Softbound edition. 328 pages, with a staggering 121 black and white photos, 72 diagrams and a large glossary, no index.