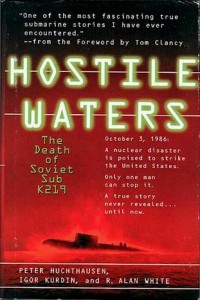 “HOSTILE WATERS” The Death of Soviet Sub K-219. By Peter Huchthausen, Igor Kurdin, and R. Alan White. Huchthausen also wrote “October Fury.” Foreword by Tom Clancy. October 3, 1986: A nuclear disaster is poised to strike the United States. Only one man can stop it. The true and terrible death of the Soviet submarine K-219. The nuclear sub went to her watery grave in 16,000 feet of water, and now the highly classified story has finally surfaced in this excellent book. Co-author Igor Kurdin was the executive officer aboard the ill-fated K-219. Hardback with dust jacket. 303 pages, 23 black and white photos, 1 map, a K-219 crew roster, no index.