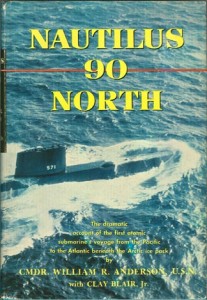 “NAUTILIS 90 NORTH” By Commander William R. Anderson USN, with Clay Blair, Jr. The dramatic account of the first atomic submarine voyage (USS Nautilus / SSN-571) from the Pacific to the Atlantic beneath the Arctic ice pack in the summer of 1958. The top-secret operation was known only to a handful of men, including the President. The exciting story is told by the subs’ skipper, Commander William Anderson. 1959 Hardback edition with dust jacket. Jacket is shelf worn and shows moderate damage. 251 pages, 28 black and white photos, a complete USS Nautilus crew roster and an index.