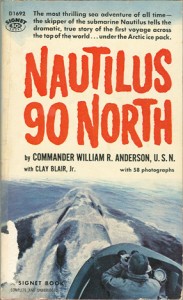 “NAUTILUS 90 NORTH” By Commander William R. Anderson USN, with Clay Blair, Jr. The dramatic account of the first atomic submarine voyage (USS Nautilus / SSN-571) from the Pacific to the Atlantic beneath the Arctic ice pack in the summer of 1958. The top-secret operation was known only to a handful of men, including the President. The exciting story is told by the subs’ skipper, Commander Anderson. Paperback edition. 144 pages, 52 black and white photos, several diagrams, 3 maps, a complete USS Nautilus crew roster and an index.