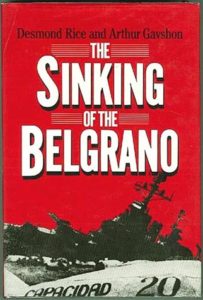 “The SINKING Of The BELGRANO” By Desmond Rice and Arthur Gavshon. Launched March 12, 1938 the USS Phoenix (CL-46) was at Pearl Harbor on December 7, 1941. The Brooklyn-class cruiser managed to get underway and escape damage from the surprise Japanese attack. The American ship went on to establish a distinguished combat record in the Pacific during World War II. After the war Phoenix was decommissioned and in 1951, sold to Argentina and renamed General Belgrano. In April 1982 the South Atlantic War, commonly known as the Falklands War broke out. It was a brief battle between Britain and Argentina. Escorted by two guided-missile destroyers the 12,000-ton Belgrano went to sea, unknowingly followed beneath the ocean by the British nuclear submarine HMS Conqueror. Obtaining approval from the British navy, the skipper of Conqueror fired a salvo of torpedoes at the Argentina cruiser and Belgrano quickly sank––368 of her crew were lost. Belgrano was the first warship and the only cruiser to be sunk since (World War II) 1945––and the first ship in history to be sunk in action by a nuclear submarine! 1984 first edition Hardback, with dust jacket. 218 pages, 8 black and white photos, 2 maps, appendix and an index.