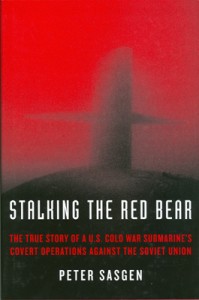 “STALKING The RED BEAR” The True Story Of A U.S. Cold War Submarine’s Covert Operations Against the Soviet Union. By Peter Sasgen. Stalking The Red Bear”––for the first time ever, describes the action principally from the perspective of a commanding officer of a Sturgeon-class nuclear submarine during the Cold War, taking readers closer to the Soviet target than any work on submarine espionage has ever done before.

This is the untold true story of a covert submarine espionage operation against the Soviet Union during the Cold War as experienced by the Commanding Officer of an active submarine. Few individuals outside the intelligence and submarine communities knew anything about these top-secret missions, and with good reason: the curtain of secrecy surrounding submarine operations, beginning in World War II, is nearly impenetrable. Cloaking itself in virtual invisibility to avoid detection, the American’s went sub versus sub deep within Soviet-controlled waters north of the Arctic Circle, where the risks were extraordinarily high and anything could happen. Readers will discover what it was like to carry out a covert mission aboard a nuke and experience the sights, sounds, and dangers unique to the submarine service. New hardback edition with dust jacket. 297 pages, with 26 black and white photographs. An appendix, index, and 1 map. Retail $25.95 save $5

“A hard book to put down. Extremely well researched view of sub duties from both sides. The most in-depth look at Soviet life and duties of submariners I’ve read yet.” – R.K. Carpenter

“Five COMPELLING Stars! In “Stalking the Red Bear”, author Peter Sasgen investigates highly-classified U.S. Navy nuclear attack submarine operations that were conducted under the code name “Holystone”, which according to the author encompassed clandestine Navy “covert submarine espionage operations against the Soviet Union”. It began in the late 1940’s and continued through the remainder of the Cold War and beyond. But this book is not a work of documented history, although it addresses incidents like the “Thresher” and the “Scorpion”: it takes the reader on a fascinating, sometimes hair-raising journey made up of reconstructed operations, procedures, scenes, and conversations based on unlimited, unclassified access by the author to an actual ‘Holystone’ attack submarine commander: the payoff is that the reader follows a notional crew on a step-by-step spine-tingling deployment to the Barents Sea. it’s a risky literary approach for a real-world book, but as one gets caught up in the undersea action, it works. A prodigious amount of information, ‘word pictures’, and history is imparted to the reader using this convention. Antisubmarine warfare (ASW) and intelligence gathering are major parts of this book, but the hardships, tenacity, and dedication of the heroic ‘submariner’ personnel and their families are the real story. The U.S.S.R. once threatened to “bury” America, this book shows how seriously we took the threat of all-out war and how our un-trackable nuclear subs were the hammer the Soviets feared most of all. You may never forget the experiences of the pseudonymous “Captain Roy Hunter” and the “USS Blackfin”. And do read the appendices which are loaded with anecdotes, such as some of the heroic exploits of “Lucky” Fluckey and Street, both Congressional Medal of Honor winners: well worth the time. My Highest Recommendation. Five HUGE Stars!” – rbsprods

Peter T. Sasgen (above) was born in Evenston, Illinois, in 1941. A graduate of the University of the Arts in Philadelphia, he served in the U.S. Navy as a staff artist with “All Hands” magazine from 1965 to 1967 and then worked as a graphic designer and photographer in Washington, D.C. He and his wife Karen, now operate a design studio in Philadelphia. Sasgen has had a lifelong interest in submarines and the war in the Pacific. Sasgen also wrote the book, “Red Scorpion” which deals with the history of the American World War II submarine USS Rasher (SS-269).