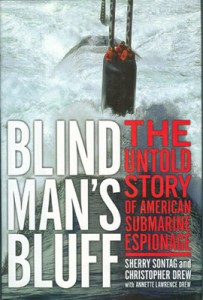 “BLIND MAN’s BLUFF” The Untold Story of American Submarine Espionage. By Sherry Sontag and Christopher Drew with Annette Lawrence Drew. The true and exciting story of American submarine espionage during the Cold War era. No espionage missions have been kept more secret than those involving American submarines. Only presidents and a select few have known the truth about the submarines that have for decades silently roamed the depths in a dangerous battle for information and advantage. Even the families of the men on board had no idea what their husbands, sons and brothers were doing. America’s submarine espionage remained one of the last great military secrets.

Now, after six years of research, veteran investigative journalist Sherry Sontag and award-winning New York Times reporter Christopher Drew (with Annette Lawrence Drew) finally reveal the exciting, epic story of adventure, ingenuity, courage and disaster beneath the sea. Blind Man’s Bluff shows for the first time how the U.S. Navy sent submarines wired with self-destruct charges into the heart of the Soviet seas to tap crucial underwater telephone cables. Sontag and Drew unveil new evidence that the Navy’s own negligence might have been responsible for the 1968 loss of the nuclear sub USS Scorpion (SSN-589), a submarine that disappeared with all hands. They disclose for the first time details of the bitter war between the CIA (Central Intelligence Agency) and the Navy and how it threatened to sabotage one of America’s most important undersea missions. They tell the complete story of the audacious attempt to steal a Soviet submarine with the help of eccentric billionaire Howard Hughes, and how it was doomed from the start. The full story on the tragic loss of USS Thresher (SSN-593) in April of 1963. The authors take us inside clandestine Washington meetings where top submarine captains briefed U.S. presidents and where the espionage war was planned one sub and one dangerous encounter at a time. And they take us under the waves into the cramped quarters of American and Soviet submarines, where days of boredom were broken by moments of sheer terror as subs hunted each other in the dark silence of the deep sea, the shallow coasts, and even underneath the Artic ice. Stretching from the years immediately after World War II to the spy operations of the (Bill) Clinton Administration. A magnificent achievement in investigative reporting Blind Man’s Bluff reads like a spy thriller, but instead everything is true! A New York Times “Bestseller!” Used hardback edition with color dust jacket. 352 pages, 47 black and white photos, 2 maps, 2 submarine diagrams, appendix and an index. Hardback editions like this one are out-of-print.

“This book is a series of long vignettes about submarine spying and operations during the Cold War. That these collections of stories are able to be told are a testament to the author’s research and abilities to remove submariner’s from their oaths of silence. The fact that they are writing about still classified events means “Blind Man’s Bluff” lacks a central story line or continuous chronology. The authors could only relate those events that participants chose to disclose and describe. Thus, the book is very episodic as opposed to being a neat history of the subject. That being said, the stories are fascinating and moving. Thank a submariner the next time you run into one. These men risked (and still risk) a cold and silent demise in pursuit of their missions—missions that contributed greatly to ensuring that the Soviets would not be tempted to go nuclear during the cold war due to our constant ability to keep ahead of their technology, strategy and tactics and general war fighting ability.

The stories are thrill rides of missions in Soviet waters, collisions between U.S. and Soviet subs, the loss of both Russian and American boats (with all hands), and close to shore cable tapping by our navy that is as breathtaking as anything Tom Clancy could dream up. The authors do sometimes go overboard in their “breathless” writing as some of the other viewers write, but I found this only a minor annoyance. The stories of the men and machines themselves are the focus and the authors write them well. (The only thing that nagged me through the book was the realization that so many of our naval personnel were willing to talk about events that they swore never to reveal. The authors do not spend much time on this issue. My hope is that the Navy has given the quiet ok to these veterans as a way of acknowledging their historic service. The alternative is that a large number of sworn men broke their commitment and may be making it more difficult for current submariners to perform their necessary missions.)” – Wayne A. Smith

“In 1984, Tom Clancy published his famous book “The Hunt for Red October.” It was a brilliant work of fiction, and close enough to the truth that CIA and Navy types worried there might be a leak somewhere. “Blind Man’s Bluff” is the true to life stories of the heros of the “Silent Service” the submariners who travel far, deep, quiet but also have to keep silent about what they do. The exploits of these sailors is exciting, this book reads like a novel. To say these sailors had guts would be an understatement. There are maps, diagrams of subs, photos that help tell these fascinating tales of underwater bravery. The authors tell of the successes, the failures, the politics, the morality of our spying objectively and factually. We certainly pushed the envelope of our spying and crossed the line on several occasions, but we won. And he who wins gets to write the history. Now declassified operations that involved tapping Soviet phones, trying to recover Soviet crashed subs, stalking subs, the “Crazy Ivan” moves you find in Clancy’s work is true. The Soviets spied on us as well, we just out did them and took more risks. A very worthwhile read for anyone interested in the Cold War, Spying, US Naval operations from 1945-1998. There is a section on the Soviet perspective of the submarine operations which is very interesting as well.” – cpt matt

“This book is an awesome book! “Blind Man’s Bluff” takes you inside some of the most secret submarine missions of the Cold War, from the diesel days of Cochino to the nuclear submarines. It includes a great list of submarine awards from 1958 – 1998! If you like espionage stories or just a great nonfiction novel, you will love this book.” – unknown reader