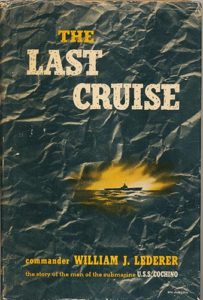 “The LAST CRUISE” By Commander William J. Lederer, USN. As the cold war between Russia and America began, the U.S. Navy sent the submarine USS Cochino (SS-345) on one of the first spy missions. However due to censorship the book fails to mention the true patrol orders. Commissioned in August 1945, the World War II Balao-class sub ran into trouble in the Atlantic. Four-hundred miles north of the Artic Circle, for 14-hours Commander Rafael Benitez and 78 men battled to save their boat. On August 25, 1949 Cochino sank beneath the frigid waters. Operating close by, sister submarine USS Tusk (SS-426) rescued most of Cochino’s crew and sadly lost some of their own. A true but tragic story. Crew rosters included. Rare book and very hard to find! 1950 first edition Hardback with dust jacket. 110 pages, one diagram but no photos or maps.