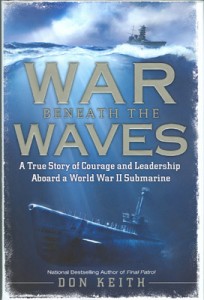 “WAR BENEATH The WAVES”  A True Story of Courage and Leadership Aboard a World War II Submarine. By Don Keith. In November 1943, a young officer named Charlie Rush drew duty on the American submarine USS Billfish (SS-286). While the Billfish was on a patrol in the Pacific and operating in the Makassar Strait, a Japanese task force spotted the sub and launched such a vicious depth-change attack that no vessel could possibly survive. Rush, as a diving officer, ordered the ship to dive, despite the confusion and hesitation of his captain. As he oversaw damage control, thundering depth charge explosions racked the submarine during fifteen hours of hell under the sea. When he was finally able to seek out the captain, Rush found no one at the helm. The skipper and two senior officers were all incapacitated—either from fear or lack of breathable air. Billfish was dead in the water. Boldly assuming command of the submarine—and summarily relieving his commanding officer—Rush led key members of the crew in an impossible effort to keep their boat intact as they tried to escape. Through his extraordinary heroism and coolheaded judgment, the young officer saved the crew of the Billfish from certain death. Sixty years passed before this remarkable story came to light, and even then only after Charlie Rush initiated action to get recognition for his shipmates for what they did that night, In doing so, Rush was awarded the Navy Cross in 2003. Now, in “War Beneath the Waves,” this intense story can finally be told in all its gripping detail. It is an inspiring tale of one man’s heroism and courage under fire, and the remarkable efforts of a submarine crew to do their duty and save their ship. This new hardback edition has 295 pages, 18 black and white photographs, appendix and index, no maps. Order yours today!

“There are 3 subjects in `War Beneath the Waves’. The first is the submarine `Billfish’ and especially the 15 hour depth-charge that it endured, where the commanding officer was paralyzed with fear and the exec was unable to take charge. Charlie Rush took over and led the sub to safety. The 2nd subject is the 60 year wait for the men who saved the ship to be recognized as the heroes they were, and receive some of the Navy’s highest decorations. The 3rd subject is life in a sub. If you have never been in the claustrophobic conditions that these vessels contain, you can and will appreciate how much these men endure. These 3 stories are combined in a simple enough manner that anyone reading can understand the workings of the submarine, the engines, torpedoes, the problems of fumes, smells, food and water. There are horrendous examples of “loose lips”, even a Congressman telling the newspapers how Japanese depth charges were not working. There is one of the best prologues with descriptions of men under depth charges and the results. The caution of the author to not judge harshly for those of us sitting safe and secure is well taken; but the story will haunt those that know and respect military traditions and its’ working discipline. The conditions of submarine warfare and life will haunt the reader too. This is a book that has served its’ purpose to describe the men’s heroism and the submarine service.” – unknown reader

“Once again Don Keith shows us his ability to capture not only the facts but the intense feelings of life and war aboard a submarine… His latest book War Beneath the Waves will keep one eager to turn the page and unable to put the book down. Submariners and those interested in the world beneath the waves will agree this book is a must read!!” – Gary S. Schmid

“Imagine that you’re suffocating from poisonous gas being pumped into the chamber you’re locked in. You hear explosions and feel concussions all around. You feel helpless as you are thrust down toward a watery grave. Fear is gripping you, and thinking about a terrifying death is pushing you toward madness. Will you drown or pass out from a lack of oxygen? War Beneath the Waves by Don Keith is not a Hollywood movie or a fictional horror novel, it’s the true story of the submarine the USS Billfish and the men who served aboard her during World War II. They lived and fought in horrible conditions so they could defend America by hunting the enemy in stealth. Some of our submerged predators were commanded by men whose lack of fortitude put our sailor’s lives at risk, and some had cunning skippers who inspired valor in their crews and used their boats to deal punishing blows to the enemy. These commanders had to make up the rules as they went along because although submarines weren’t new, we had never used them in such a wartime manner and there was no previous experience for predicting the nature of enemy engagements. Dauntless skippers learned from their mistakes, if they lived through them, and then incorporated what was successful into their rule book. This book is a great read for all and especially our military. The behavior of the officers described in this book must certainly be used as lessons for our current officer corps. Enemies change and evolve and only a military that is adaptable and sometimes daring can be prevail. This book will improve the crucible in which we test our military before they get to war, and the harder they are tested in training the less likely they are to fail in combat. You will find this book to be an exciting page turner as well as educational!” – Donna Diane

Don Keith is an award-winning author, journalist, and broadcast personality. He was twice named Personality of the Year by “Billboard Magazine.” His first novel, “The Forever Season,” was named Fiction of the Year by the Alabama Library Association. “Gallant Lady,” his true story of the World War II submarine USS Archerfish, was a featured selection of the Military Book Club. Don also wrote “In The Course of Duty” and “Final Patrol.” Don lives in Indian Springs Village, Alabama, with his wife, Charlene.