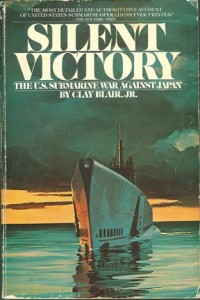 “SILENT VICTORY” The U.S. Submarine War Against Japan. By Clay Blair, Jr. Here in a single book is the decisive word on American’s submarine activity in World War II. Clay Blair cuts to the core to tell the full and compete story––holding back nothing. From before the war got underway until the last torpedo was fired in 1945––no submarine library should be without this outstanding book! “Silent Victory” takes you into the submarine war on all levels, the highest strategy sessions in Washington, the terrifying moments aboard a submarine trapped on the bottom as Japanese depth charges explode around it. Jealous infighting of admirals vying for power, overcautious skippers, the shocking torpedo scandal and the toll it took. The complete saga that led to victory is here––a work of great scholarship and scope, a timeless contribution to the history of World War II. In preparing to write this book, Clay Blair, Jr., combed hundreds of thousands of pages of recently declassified documents and personal letters. In individual interviews he listened to scores of World War II submarine skippers, staff officers, and code breakers speaking freely. He researched in depth the development of submarine and torpedo from pre-war days down to the present time. 1976 Bantam Softbound edition, a large 6X9 inches, nearly 2 inches thick. 1,072 pages, 91 black and white photographs, 37 maps and an extensive 104 page appendix with index. This book has the same great information found in the original 1975 first edition.