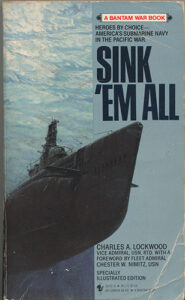 “SINK ‘Em ALL” By Vice Admiral Charles A. Lockwood, Jr., USN. Foreword by Fleet Admiral Chester W. Nimitz, USN. They were called America’s “Silent Service”––and were as deadly and devastating as they were cunning and covert. From the black day at Pearl Harbor to the brilliant battle of Midway to the bold and dangerous invasion of the Sea of Japan, the Pacific submarine fleet played a vital role in the Allied victory in World War II. “Sink ‘Em All” is a commander’s account of the U.S. Navy’s explosive undersea war with Japan. During World War II, Charles Lockwood became the Commander of the U.S. Submarine Fleet in the Pacific (known as ComSubPac). The author tells the exciting and heart-wrenching story of the submarine action in the Pacific. He recounts the daring lightning-quick raids, the spy and rescue missions into mine-infested enemy waters, the massive naval engagements and the smashing of enemy convoys. This is the true story of America’s “wolf packs” prowling the Pacific, dodging dept charges and terrorizing the Japanese with unending salvos of torpedoes. In charge of the day-to-day sub operations, Admiral Lockwood knew the boats and their gallant skippers on a professional and personal level. Lockwood wrote; “Many of the tales were related to me by commanding officers, just in from a patrol, over a cup of coffee in the wardrooms of their own submarines.” A magnificent tribute to the courage, initiative and self-sacrifice of the brave men who fought beneath the sea and gave their lives in the service to their country. Lockwood went on to write several more submarine books including; “Hellcats Of The Sea” and “Down To The Sea In Subs.” “Sink ‘Em All” is long out-of-print and hard to find. This is a rare, Bantam Paperback edition. 397 pages, many illustrations, one-map, an index but no photos. Note cover condition with lower right folds. Inside is nice.

Charles Andrews Lockwood, Jr., was born May 6, 1890 and graduated from the Naval Academy in 1912. He entered the submarine service in 1914 and spent most of 39 years in submersibles. Lockwood became Chief of Staff to Commander Submarine Force in 1939. Following promotion to Rear Admiral in March 1942 he proceeded to West Australia as Commander, Submarines, Southwest Pacific (ComSubSoWesPac). In February 1943, after the tragic death of Rear Admiral Robert English, Lockwood was promptly transferred to Pearl Harbor, Hawaii to take over as Commander, Submarines, Pacific Fleet (ComSubPac), a position he held for the balance of World War II. Lockwood’s strong leadership and devotion to his troops won him the nickname “Uncle Charlie” and a promotion to Vice Admiral in late 1943. During his wartime tour, Lockwood devised tactics to make the most effective use of submarines and pushed the Navy’s Bureau of Ships and Bureau of Ordnance to provide his men with the most effective submarines and torpedoes possible. He oversaw the tests that proved the unreliability of U.S. torpedoes, and prompted the improvements that made them the highly effective weapons they became. Lockwood’s awards in World War II included the Distinguished Service Medal, two Gold Stars in lieu of second and third awards, and the Legion of Merit. Following World War II, Lockwood served as Inspector of the Navy until his retirement in June 1947. Retied Vice Admiral Charles Lockwood, Jr. wrote several books including “Sink ‘Em All.” He coauthors several others with Col Hans Christian Adamson, USAF, (Ret.). Charles Lockwood’s last book was his autobiography titled, “Down To The Sea In Subs.” He passed away on June 7, 1967.